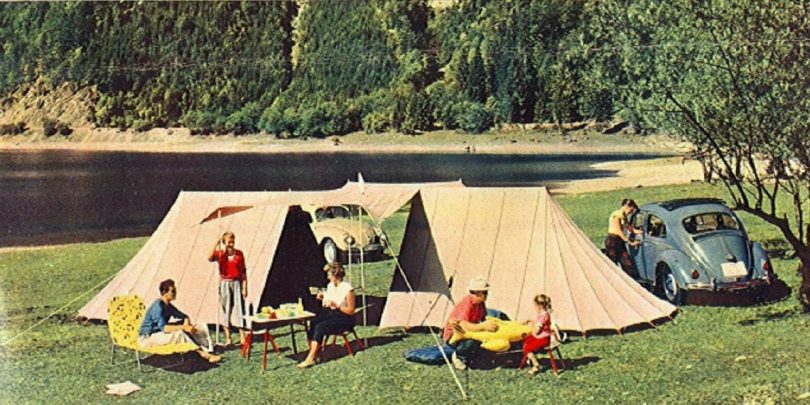 Few things in life ignite a sense of nostalgia like vintage camping gear. You remember, all the stuff that dad threw in the back of the station wagon before he dragged your ass into the mountains for a weekend? We’re talking stuff so vintage, that it was vintage well before he ever laid eyes on it at that garage sale.

But for all the clunkiness and inconvenience, something about that old gear just brings you back to a happy place. A simpler time, when technology was still a infant, and the only things that mattered were the after-school games of neighborhood streetball.

So as you’re making plans to get outside for your next adventure, we thought we’d serve up a little nod to the past. Here’s our handpicked list of the most classic vintage camping equipment. Some of this stuff you can still find on Ebay or Amazon. Others however, are completely relegated to the realm of estate sales and the Salvation Army. Enjoy!

Never mind the frame, the compression straps, or hydration bladder–throw this knapsack on your back and hit the trail! 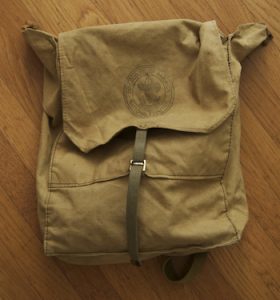 Packs like these saw a lot of action in the early days. Admittedly, this pack predates much of the other gear featured in the article, but this offering from the Boy Scouts of America was still very widely used throughout the 1950’s. It was also the predecessor to the framed version known as the “Yucca” that was used well into the 70’s by many.

Think how easy buying a pack would’ve been back then. No need to fit it to your torso, or check how it sits on your hips.

Just slam your hand on the counter, and with authority say, “I’ll have one pack please.” Ahhh…. simpler times.

“That’s not a knoife, this is a knoife!!!” (in the most Mick Dundee voice possible) You were already thinking it, I just said it for you. 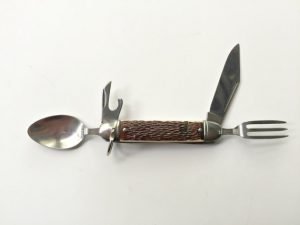 Nothing says “badass” quite like having a knife on you. It’s always been that way. And if you had this sucker on you in the 1950’s, you were a prince among men. It wasn’t just any knife. It was a Colonial.

That’s right, this thing could do it all. Cut and clean fish, pop the top on a cold one, or even use the spoon to slurp up some soup (might want to make sure you’re current on all your shots). 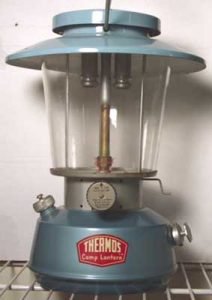 The old camping lanterns are iconic. Some of the really old ones look like something that a miner in the 1800’s would of used. The 50’s and 60’s versions are still throwback, but in more of a “mid-century” kinda way. We love these.

Thermos was a pretty big player in the game, and they were on it with this single-mantle design from the early 1960’s (model #8325).

Today, you can find some pretty cool replicas on Amazon, and there are also plenty of these to be found in 2nd hand stores. Salute!

One of the predecessors to modern Stove Pop type options, this was it for campers in the old days. In addition to being used over campfires, this popper actually saw its way to plenty of fireplaces throughout the years as well.

Fortunately for us, Camp Chef actually makes a near identical replica of the vintage models, that can be had for around $20. If interested, check it out here.

Nothing screams “vintage” quite like the wide red laces and metal D-ring lace loops of vintage hiking boots. Good news is–you can still find em a lot of places.

These Danners are made of a 1-piece leather upper, and they’re ready to shred. Though certainly not the cheapest boot around (over $300!), they are stylish and extremely rugged. There’s a reason these suckers have so many positive reviews on Amazon.

Wide, comfortable, and built to be worn in all conditions, these are definitely not just your grandpa’s hiking boots. 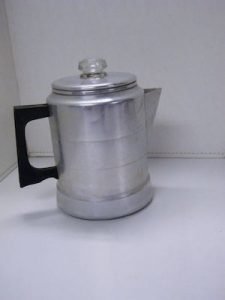 Our ancestors didn’t play around when it came to camping and coffee.

Look at this coffee pot. You think they cared that it weighed 19 and half pounds to lug that thing around? No. They wanted that coffee, and they wanted it done right (plus I’m pretty sure they actually weren’t lugging it from further than their cars).

Aluminum construction and retro styling make this the perfect fireside accoutrement for your throwback camp breakfast.

No need to be stingy either, the Worthmores were made to hold 6, 8, or 12 cups worth of coffee. Share it up and get the morning started right.

These were the quintessential companion on any retro campout (and many still today).

Made of wool, these army surplus blankets could take a beating. Scratchy and thin, they never really screamed “good night’s sleep” to me, but hey, respect to the feral mountain men that used em.

If you want one, they’re still coming off the press–snag one here.

Today’s kids have no idea. In the golden age of camping, people had no use for fancy materials and intricate designs (or…. they just didn’t exist yet). It was all about the canvas. 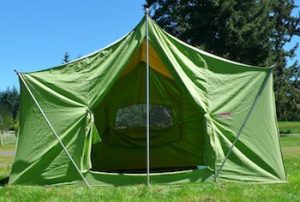 And nobody did it better than Coleman. As one of the oldest names in the game, Coleman was on the scene early, cranking out this classic of theirs, known as the “American Heritage.”

Almost 8 feet tall in the metal, heavy duty poles, and enough space to sleep 6 people, this tent-fortress was the mainstay of campers for decades. Eat your hearts out ultralighters!

When you’re camping, eating is sacred. After a long hard day of hiking, setting up camp, or…..laying around playing cards… nothing puts a smile on the face like some hearty grub.

In the world of vintage camping stoves, the Coleman 425C reigned supreme. For decades, it maintained a unquestioned place of dominance. I mean, look at this thing! Sleek lines. Deep, forest green hue. Even some clever windshields on the sides.

What’s not to love?

This stove was the gold standard for many years in the 50’s & 60’s. No idea what the weight was on this puppy, but when you look this good, who cares right?

Good news–if you like it, Coleman still makes a near exact replica, that you can pick up on Amazon (and it’s duel fuel!).

Get Your Vintage On

Well, there you have it. Some of the quintessential pieces of gear from a classic era of camping.

Hope you enjoy these, and should you choose to include one of these (or a replica) in your gear repertoire, own it!

Want more camping gear? Check out our other reviews on: