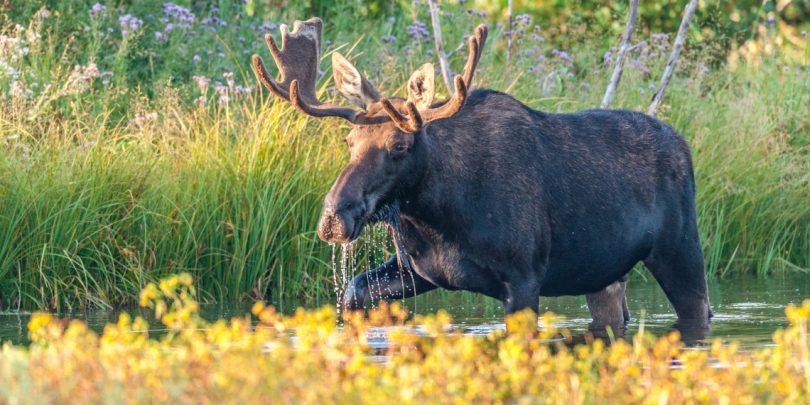 Looking for the MeatEater Marathon Dream Job? The job posting has been officially closed, and our winner has been announced!

When you can’t be out hunting, the next best way to get your fix is with some good hunting TV right?

Well, lucky for us, there are a lot of hunting shows online these days. Lots of different “on-demand” and streaming services have entire seasons of hunting programs, queued up and just waiting for you to hit play. There’s Netflix, Amazon, and even a handful of outdoor specific services, like The Outdoor Channel and My Outdoor TV.

Plus there’s actually some really great stuff on YouTube these days as well. We thought it might be helpful to assemble them all in one giant master list. So get comfortable, choose your favorite streaming service, and get to watching (or if you’re like us, don’t discriminate and watch ’em all). In this list (Jump To):

While Netflix is the first streaming service that most people think of, when it comes to hunting, the pickin’s are pretty sparse. In fact, Meateater is really the only hunting show worth noting that you can get on Netflix.

For a while, Netflix used to have Babe Winkelman’s “Outdoor Secrets” and Scott Haugen’s “The Hunt“, but both of these seem to have been removed. The good news is that Meateater is a fantastic watch. It’s extremely popular, and truly, one of the best (if not THE best) series out there.

Unlike Netflix, Amazon is loaded with shows that you can stream at your convenience. One downside with Amazon however, is that even if you have a “Prime” membership, some of the shows still require that you pay by the episode or season.

So you will either have to search through the titles to find out which ones are included in the Prime membership, or just stop being such a cheap bastard and pay for a few shows! 😉

Either way, they have a ton of great stuff. If you do watch shows on Amazon, remember to leave a review–it never hurts to show Amazon decision makers that there is activity and interest for the series that we like.

Unfortunately, as with Netflix, Hulu almost no real hunting content.

If you’re not familiar with Kodi, essentially it’s an adapter that allows you to stream both live and preprogrammed TV shows and movies. It’s basically a way to hack your TV and source a bunch of free programming. One of the attractive things about Kodi is that doesn’t involve monthly costs. On the downside however, it is a little less “out of the box”, and requires a little bit more technical know-how. More about how it works here.

At any rate, if you do have Kodi and are wondering if there is stuff you can watch with it, the answer is YES! With the right plugin, you can get The Hunt Channel. If you’re like most of us, you probably won’t be doing much with the Kodi, but it’s cool to know that there are some good shows available.

Hunting Shows on The Outdoor Channel

Drury is another independent media publisher, that has 4 fantastic shows on hunting.

Ducks anybody? These shows are focused exclusively on waterfowl hunting. Get tips, tricks, and inside looks. So when you’re in the mood for a little winged action, these are your go-tos:

What hunting shows are on Netflix?

Sadly, one of the only true hunting shows that is on Netflix is Steve Rinella’s MeatEater. Thankfully, this is also one of the best and longest running shows as well. However, for people that want a little more on the menu, there are hundreds of other great shows on Amazon Prime, Hulu, Carbon TV and YouTube (full list here).

What fishing shows are on Netflix?

Netflix has a handful of incredible fishing shows to binge on. Chasing Monsters and Hardliners are a couple of the best and most watched. As is the case with hunting however, if you want a full on buffet of fishing shows, Amazon Prime is a much better provider, with lots of fishing adventure shows, tournaments and competitions, and much more (complete list here).

Can you stream Outdoor Channel?

The best way to stream the Outdoor Channel is through a service like My Outdoor TV (it also gives you access to Sportsman’s Channel and tons of other hunt and fish shows). It does cost 10 dollars a month, but they give you a free trial so you can try it out and see if you like the shows that they have.

What channel is MeatEater on?

MeatEater airs originally on the Sportsman channel, and is also available to stream on-demand on Netflix.

p.s. Be sure to check out our lineups of the best fishing shows and survival shows….